Which cricketer has scored the maximum runs in the cricket World Cup? 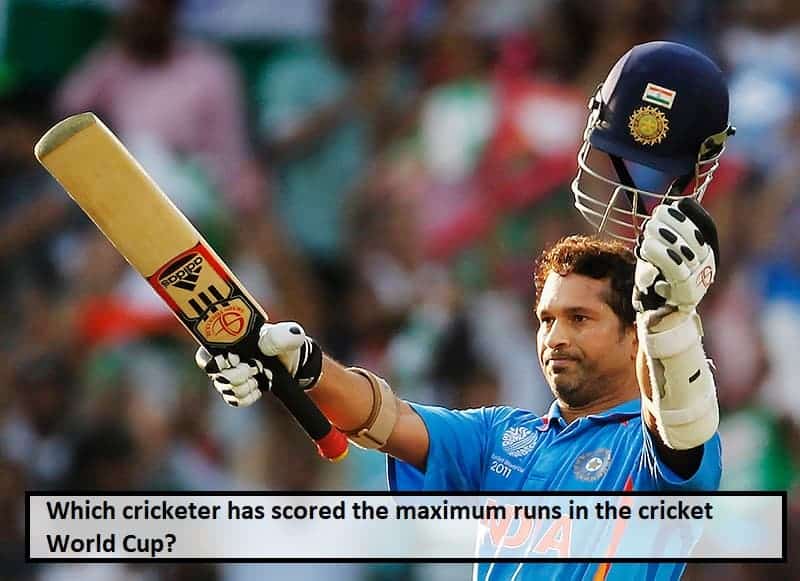 Cricket is one of the largest growing sports in the world. The game is slowly and Steadily gaining popularity in different continents. Various Events related to cricket are organized throughout the world by ICC to promote and make other nations participate in the league.

One of them is the ICC Cricket World Cup organized by the International Cricket Council which is the Highest Governing Body of Cricket. 12 Editions of World cups have been played so far, the Tournament is played once every four years.

Many runs are scored and Wickets are taken as the competition is very tough and the winner is crowned as the world champions. Australia has won the most number of World Cup which is 5 times and England is the current Champions of the league. World Cup has seen many Batsmen do wonders on the Field, Let’s have a look at the Batsmen who have scored the most runs in Cricket World Cup.

1) Sachin Tendulkar– Also known as the Master Blaster, Sachin Tendulkar is considered one of the greatest Batsmen in crickets history. Tendulkar has scored the most number of runs in International Cricket. In the world cup also, he is the highest run-scorer, Sachin has played 45 matches and has batted in 44 innings. In those innings, he has scored 2278 runs which include 6 centuries and 15 half Centuries. His highest score in World Cup is 152 runs.

2) Ricky Ponting– Ricky Ponting is an Australian Batsman who led the Aussies in the Golden era of their Team. Ponting is the most successful captain in International Cricket. Apart from this, he also is a very successful Batsman who has played crucial innings which made Australia a world-class team. In World Cup, Ponting has played 42 innings in 46 matches. He has scored 1743 runs which include 6 centuries and 6 half-centuries and has a high score of 140 not out.

3) Kumar Sangakkara– Sangakkara was a wicket Keeper batsman who played for Sri Lanka. He has scored the second most amount of runs in ODI cricket and is considered as one of the greatest Wicket Keeper Batsman. He has the most dismissals by a wicket-keeper in ODI. In World Cup, Sangakkara has played 37 matches and batted in 35 innings. He has scored 1532 runs which include 5 centuries and 7 half-centuries and a high score of 124.

4) Brian Lara– Brian Lara is regarded as one of the greatest Batsmen of all time. He has broken many records in Test and has scored the highest individual score in Test innings. Lara apart from being very good in Test, also performed in World Cups in which he played 34 matches and 33 innings. He has scored 1125 runs which include 2 centuries and 7 half-centuries with a high score of 116.

5) AB de Villiers– Ab de Villiers is a South African Batsman who holds the record of fastest 50,100 and 150 runs in ODI cricket. De Villiers is known for his attacking batting style and his wide range of Shots. In World Cup, he has played 22 innings in 23 matches. He has scored 1207 runs with 4 centuries and 6 half-centuries and a high score of 162 runs not out.

Share
Facebook
Twitter
Pinterest
WhatsApp
Linkedin
ReddIt
Email
Telegram
Copy URL
Previous articleWho has the best strike rate in ODI cricket top 10 cricketers with the highest strike rate?
Next articleName Top 10 cricket who made most runs in t20 cricket and he is not retired