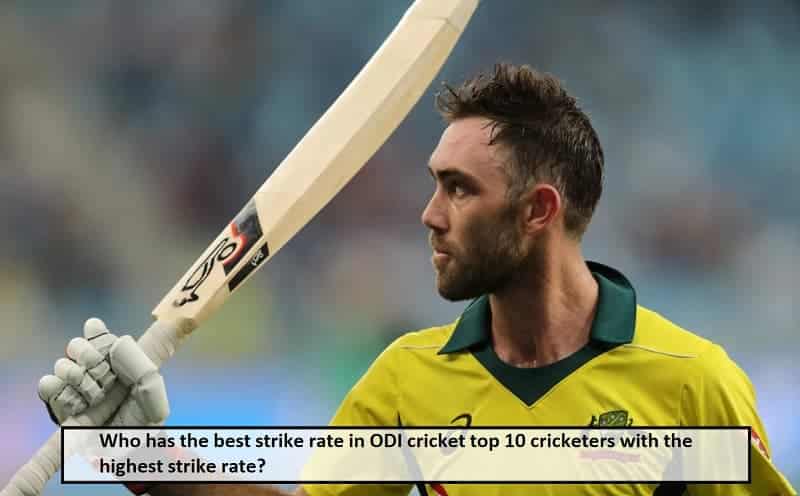 As the season for ODI matches is online. People were looking for the updated stats for the player. One day international will be played in the Ashes league and also between India and South Africa. Take a look at Who has the best strike rate in ODI cricket top 10 cricketers with the highest strike rate.

Australian right-handed batsmen also list his name for the Indian premier league. Glen Maxwell had played many international matches and is one of the prime batsmen of the Australian cricket team. Glen had played about 116 ODI matches with a scoring total run of 3230 with the highest strike rate of 125.4 in the format.

England right-handed batsmen also play an important role in a match behind the Wickets. Jos Buttler played the role of wicketkeeper for many international matches and showed his worth. Butler had played about 148 matches and contributed about 3872 runs in ODI matches for the team England.

Shahid Afridi Pakistan right-handed batsman and the former captain of the Pakistan cricket team for all the formats. One of the explosive international batsmen with consistency in his form. He had played about 398 ODI matches for the Pakistan teams and had contributed about 8064 runs with a tendinous strike rate of 117.

Shri Lanka batsmen with lots of experience and one of the sharpest players in Shri Lanka. He had played for more than 5 years for his national cricket team and was also awarded as best player many a time in ODI matches. He had played about 166 ODI matches in his career and had contributed about 2338 runs with a strike rate of 112.1.

Top-order South African cricket and the former captain of the South Africa international cricket team. popularly known as AB and plays as a member of Royal challenger Banglore for the Indian premier league. He had played about 228 Matches with 9577 runs most runs in the format of ODI matches with a strike rate of 101.1.

One more south African batsman on the list is David Miller. Famous batsmen of all time piller for South African cricket team. He had not played any of the test matches but had performed fantastically in other formats. He had played about 137 ODI matches with 3367 runs contributing to his national cricket team with a strike rate of 100.8.

First Bowler to take a position in the top 10 highest strike rate list. He had always contributed with his balls in each and every match but stats with his bat are not bad. Tim had played about 143 ODI matches scoring a total of 649 runs with an explosive strike rate of 97.5 at the dept and more important runs for the team New Zealand.

Australian left-handed batsmen played for the Australian international cricket team and had changed the flow of the game single-handedly. He is one of the batsmen that the team can count upon. Last among the top 10 but not the least. He had played about 287 matches contributing a total of 9619 runs with a strike rate of 96.9.