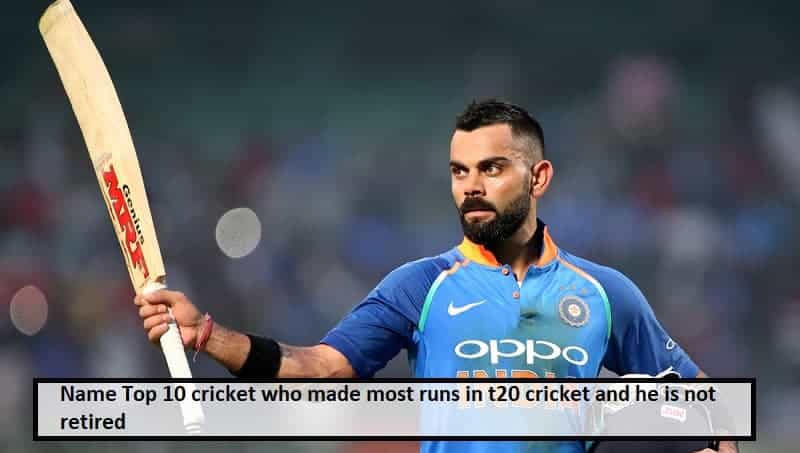 Cricket players over the years have been training in all formats seriously. There are a few players who have performed exceptionally well and have not been recognized for their efforts. Here we have listed out the top 10 players that have made the most amount of runs in the Twenty-twenty format of the game.

As we know that when we list out the top players for a sport, it keeps on changing which means there will be another player in the league trying to perform well to top the list. So the current list is according to the latest performance of the players till now. So check out the Name Top 10 cricket who made most runs in t20 cricket and he is not retired.

Name Top 10 cricketers in t20 cricket who made the most runs.

At number ten we have the Pakistani skipper Babar Azam, who has scored the most runs in T20I with 2204 runs. He has played in all 61 matches in the T20I format. His highest score in the match was 122, where the average score was 46.89. the Batsman has scored 231 fours and 33 sixes in his entire cricketing T20 series so far.

David Warner who is a former Australian Captain stands at the ninth position of the top 10 scorers of the T20 list. He is an explosive opening batsman David Warner. He has scored a total of 2265 runs in his previous 81 matches. He has an average score of 31.45 with 218 number of fours and 89 number of sixers.

Shoaib Malik is a Pakistani cricketer who stands at the eighth spot on the list, He is a reliable middle-order batsman of the Pakistan Cricket team. He has an average score of 31.13. he has a total of 192 fours and 61 Sixes.

The Irish-English player, EJG Morgan ranks at 7 in the top t20 scorers. He has presented both Ireland and England at the international level. He captains the England Cricket team in the limited-overs format. His average is scored at 28.78. In total, he has managed to get 2360 runs in his T20 career so far.

Yet another player from Pakistan Cricket Team Mohammad Hafeez who has captained the team in all formats. He has managed to get 2429 runs in a total of 113 matches that he has played so far. His average is scored at 26.40.

At number five we have the finest Australian top-order batsman, Aaron Finch. He is an aggressive batsman of Australia who has been the captain of the Australian Cricket team in the limited-overs format. In a total of 76 matches that he has played, he scored a total of 2473.

Paul Stirling stands at the 4th rank in the list. He is a formidable player of Ireland. He has managed to get a score of 2525 runs in all the 90 matches he has played. The highest run he has made is 115 runs.

Rohit is the most dangerous batsman the Indian Cricket team has. He has managed to be the dominating on the field for quite a long time on the field. He has a sharp sense of the technique and changes the face of the game. He has a total of 2864 runs scored and a total of 111 matches played.

At number second we have New Zealand’s right-handed opening batsman Martin Guptill. He has managed to get a score of 2939 runs in all 102 matches that he has played. His highest score was 105 runs. With an average of 32.29

At number 1, Indian captain Virat Kohli gets the top spot on the list. Virat Kohli is a batman of discipline and method. his recent forms at the test series against South Africa tell us sp. he has easily bagged the highest number of runs in the T20 match format. The total number of runs scored by him is 3159 runs in a total of 90 matches that he played.