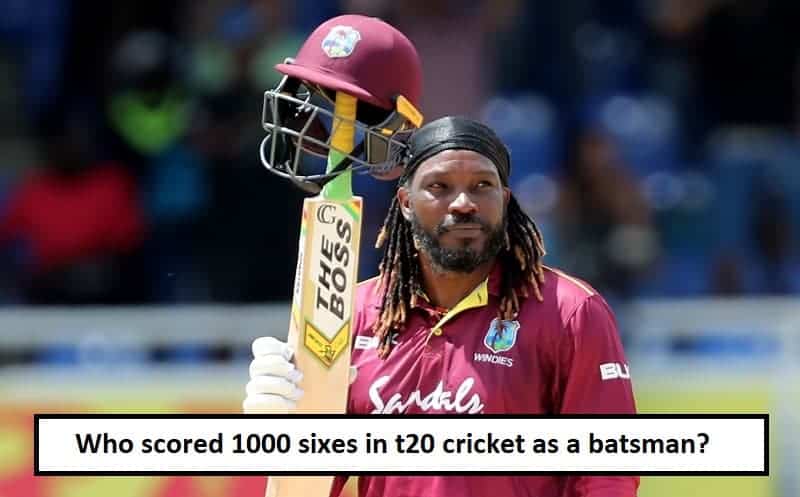 T20 Cricket is a format of a cricket match played between 2 teams. Each team plays an innings of 20 overs and is the shortest form of the game. It is one of the most entertaining forms of cricket as the duration of the Match is less and players usually go for big shots to score easy and more runs.

T20 cricket has become one of the means of entertainment for people across the globe and many countries have started domestic tournaments based on the T20 Format. Batsmen try to hit sixes in order to score runs faster and entertain the crowd. Let’s have look at the players who have hit the maximum number of sixes in T20.

Christopher Henry Gayle is also known as the Universe Boss is probably the best T20 Batsman one has seen. One loves to see thrashing bowlers’ finest delivery out of the parks. Audiences get to see fireworks when he comes into bat.

Gayle stands 6 ft 3 in tall and has a bulky body which makes his running between the Wickets slower than other Batsmen. Gayle has the power and can time his shots perfectly, this helps him to hit big shots easily.

Chris Gayle is the first player to hit 1000 sixes in T20 Format. These sixes include various international matches and domestic cricket Leagues of various countries. These sixes are being hit in the span of 2005-2021.

In a match Against Rajasthan Royals in 2021, Gayle archived the milestone of 1000 sixes. In that innings, he scored 99 runs from 63 balls for Punjab Kings. In that match, Gayle alone managed to hit 8 sixes which took his tally of sixes to 1001 sixes at the end.

Gayle has played 453 matches and has batted in 445 innings and has scored 14321 runs in which he managed to hit 1045 sixes. In T20 Format, he has the highest score of 175 runs not out which he scored for Royal Challengers Bangalore against Rising Pune Supergiants.

Pollard is a Trinidadian all-rounder who Captains the West Indies team in limited-overs of cricket. Pollard is also very famous for his long hits. For Mumbai Indians, Pollard has played many crucial match-winning innings. He was a nightmare for the bowlers in death because he literally humiliated them by smashing the ball out of the park.

Pollard has played 508 innings from 578 matches in the span of 2006-2021. He has scored 11326 which includes 761 sixes. Pollard has a high score of 104 runs. Apart from hitting sixes, Pollard is known for his acrobatic fielding and catches.

Russel is an All-rounder who plays for West Indies. Russel is a powerful hitting batsman who is feared by Bowlers especially in the death overs. Russel is known for his powerful long sixes and destructive batting. He is the second player to take a hat-trick and score a century in the same match in T20.

Andre Russell had helped his team both by Bowling and Playing crucial knocks during times when the team needed him the most. He has played 392 matches and batted in 335 innings from the span of 2010-2021. He has scored 6513 which includes 517 sixes and a high score of 121 runs not out.

The numbers can change as most of the players are still playing and we can expect an increase in a number of sixes hit.

Why is body building even a sport?