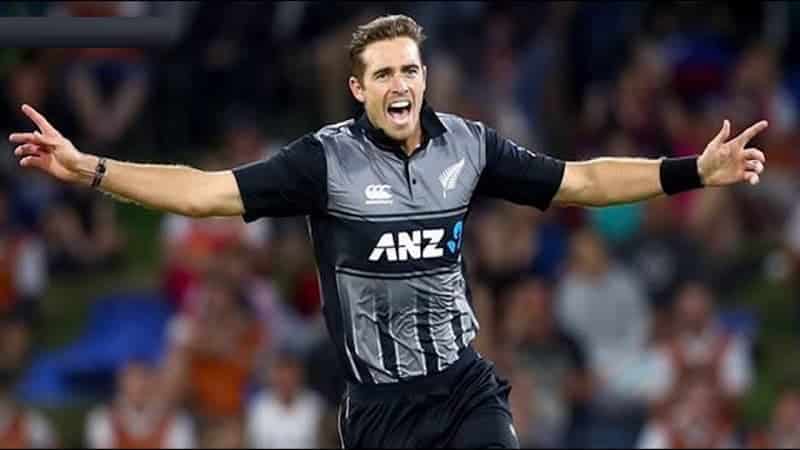 Timothy Grant Southee is a New Zealand international cricketer born on 11 December 1988 in Northland, New Zealand. Tim Southee is a right-arm fast-medium bowler and a hard-hitting lower-order batsman who plays all the formats of the game. Southee made his Test debut on 22 March 2008 against England where he took 5 wickets and scored 77 off 40 balls in the second innings. Check Tim Southee Net Worth, Retainer Fee, And Salary Breakdown.

Southee grew up in Northland and he was educated at Whangarei Boys’ High School and King’s College, Auckland. Southee was good at sports in school and he excelled at both cricket and rugby. Southee is married to Brya Fahy and the couple has two daughters.

The net worth of Tim Southee is approximately 4 million USD, which is 30 crores rupees in Indian currency. He has gathered this massive amount from his salaries, IPL contracts, and his private businesses. Southee owns various properties across New Zealand which adds up to his Net Worth.

Tim Southee has been included in the Central Contract by New Zealand Cricket and has a retainer fee of $350,000. He is one of the players to have a top contract with New Zealand Cricket. Southee gets $8495 as Test Match fee, $3682 as ODI match fees, and $2407 as T20 Match fees.

Southee was one of New Zealand’s youngest cricketers debuting at the age of 19 in February 2008. Southee is the third New Zealand bowler to take 300 Test wickets. He plays for Northern Districts in the Plunket Shield, Ford Trophy, and Super Smash as well as Northland in the Hawke Cup.

Southee has taken a total of 15 five wickets to haul in International Cricket. His first five wickets haul came on his debut against England where he took 5/55 in the first innings becoming the sixth New Zealander to take a five-wicket haul on Test debut.