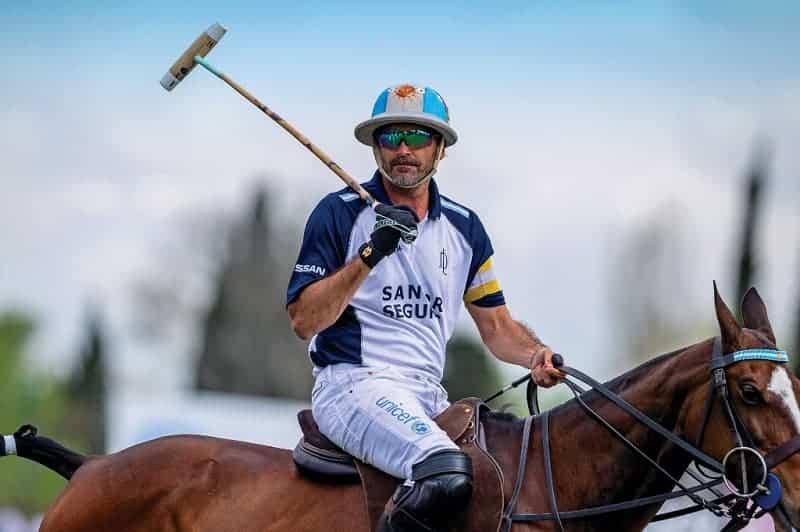 Polo is a horseback ball game and is known as one of the oldest team sports in the world. Two opposing play against each other with the motive of scoring against each other using a long-handled wooden mallet which is used to hit a small ball into the opposition’s goals. Each team has four mounted riders, and the game usually lasts one to two hours. The game is also known as The Sports of Kings. The game is governed by the Federation of International Polo. Check Top 10 Best Horse Polo Players.

The World Polo Championship is a polo competition between countries. The championship was played in 1987 in Argentina and takes place every three to four years. There is no restriction on the gender of the players. Argentina is the most recent titleholder and also the most successful team with 5 titles.

Below is are the best Polo players from around the globe. The rankings below are based on the performances of the players in recent years and goal handicaps.

Corinne Ricard is an amateur polo player and the patron of the Murus Sanctus polo team. She is one of the few women to play in a pro team consisting entirely of men. She is described as one of the most famous female polo player,rs on the planet and is Playing an important role in developing women’s polo.

Nero is an Argentine polo player with handicap 10. He is considered one of the best Polo Playe,rs and was ranked third in 2017. He won Gold Cup Deauville and the Gold Cup Sotogrande in 2001. His other achievements include Cartier Polo World Cup on Snow, the Gold Cup and the Queen’s Cup, and the CV Whitney Cup. In 2009 he won the USPA Gold Cup.

He is an Argentine Polo Player born on 17 December 1982 in Buenos Aires, Argentina. He is currently number 3 with handicap 10. Pieres was inducted into the Museum of Polo and Hall of Fame in 2008. His achievements include Hurlingham Open, Tortugas Open, and Prince of Wales Trophy.

Luke Tomlinson is a professional polo player and former captain of the England polo team. Luke was born in 1997 and has a handicap of seven goals in Britain and eight in Argentina. He is one of the top polo players in Britain. So far, he has won the Queen’s Cup, Gold Cup, and Coronation Cup.

He is an Argentine Polo Player born in Argentina with Handicap 6. His achievements include Indian Empire Shield, US Open, USPA Gold Cup, and Camara de Diputados.

Born on 19 May 1986 is an Argentine Polo Player with Handicap 10. His career started in 1997 and has played for Argentina, the United States of America, and the United Kingdom. His achievements include Hurlingham Open, Tortugas Open, Prince Of Wales Trophy, and Jockey Club Open.

Carlos Gracida was a Mexican-American polo player. He reached a 10-goal handicap at the age of 25. Carlos hails from a polo Playing family and Carlos began playing when he was only five years old and began competing at the age of ten. In 1994 Gracida won nearly every possible tournament in the game, including the Argentinian Triple Crown of Hurlingham, Tortuguitas, and Palermo.

He was born on 15 April 1975, he is an Argentine Professional Polo Player with Handicap 10. He is currently ranked as the number 1 polo player in the World. He was the youngest player in the world to attain a 10 goal handicap rating. His awards included the Olimpia de Plata award as the most important Argentine polo player of 1997. He won the Platinum Konex Award in 2000 and 2010 as the best list of each decade in Argentina.