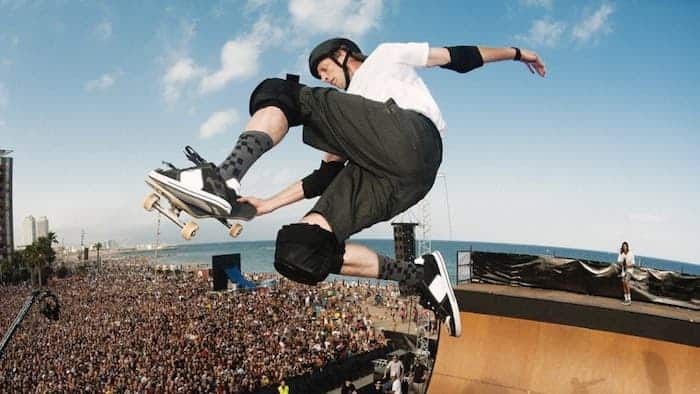 Extreme Sports are also known as Action Sports or Adventure Sports is a sport that involves speed, heights, high physical exertion, and specialized gear. The sport involves a very high degree of risk. The sport has lots of risks involved and a large amount of adrenaline is generated. These sports are usually played in Nature like on Mountains, rivers, oceans, cliffs, etc. Check Top 10 Richest Extreme Sports Athletes In The World.

Extreme Sports are not that much famous as other sports and most people do it as a leisure activity. Few have taken up the sports professionally and some extreme sports are even included Olympics. Various tournaments are organized for extreme sports enthusiasts. They get paid in form of prize money and endorsements.

Laird John Hamilton is an American big-wave surfer and co-inventor of tow-in surfing. Laird was born on March 2, 1964, in California, United States. Laird apart from surfer is an occasional fashion and action-sports model and actor. Hamilton has successfully ridden the heaviest wave ever. With all this work, he has a net worth of $5 million.

Robert Kelly Slater is an American professional surfer born on February 11, 1972, in Florida, United States. Kelly is known for his 11 world surfing championship and is widely regarded as the greatest professional surfer of all time. Kelly has appeared in many movies and is involved in media. He has a net worth of $8 million.

Robert Stanley Dyrdek is an American entrepreneur, actor, producer, reality TV personality, and former professional skateboarder. Rob was born on June 28, 1974, in Ohio, United States. Rob has 21 Guinness World Record for Skateboarding. Rob was involved in many things apart from extreme sports which helped him make a fortune of $15 million.

David Michael Mirra was an American BMX rider born on April 4, 1974, in Chittenango, New York. Dave participated in Rallycross Racing and he set the record for most medals in BMX Freestyle at the X Games. Mira was fully sponsored by Haro Bikes from the mid-1990s until starting his own bike company. Mirra died by suicide on February 4, 2016, and was inducted into BMX Hall of Fame on June 11, 2016. He had a net worth of $15 million.

Ryan Allen Sheckler is an American professional skateboarder born on December 30, 1989, in California, United States. Ryan is an entrepreneur and was the star of the MTV-produced reality television series Life of Ryan. Ryan has been listed in Fox Weekly’s 15 Most Influential Skateboarders of All-Time article. He has collaborated with brands such as Nikon, Red Bull, and other brands which helped him make a fortune of $16 million.

Mat Hoffman is an American BMX rider born on January 9, 1972, in Oklahoma, United States. Mat is considered one of the best vert ramp riders in the history of the sport. He is an Entrepreneur and runs the BMX Freestyle brand Hoffman BMX Bikes based out of Oklahoma City, Oklahoma. He has a Net Worth of $18 million.

Shaun Roger White is an American professional snowboarder, skateboarder, and musician. Shaun was born on September 3, 1986, in California, United States. Shaun is a three-time Olympic gold medalist in half-pipe snowboarding. He holds the world record for the most X-Games gold medals and most Olympic gold medals by a snowboarder. Shaun has also won 10 ESPY Awards throughout his career in various categories. With all these achievements, he has a net worth of $20 million.

Brandon Cole “Bam” Margera is an American skateboarder, stunt performer born on September 28, 1979, in Pennsylvania, United States. Bam is also a Television Reality Star and Filmmaker. He became famous as one of the stars of the MTV reality stunt show Jackass and he also created Jackass spinoff Viva La Bam and Bam’s Unholy Union and also co-wrote and directed his films Haggard and Minghags. He has a net worth of $45 million.

Anthony Frank Hawk is an American professional skateboarder born on May 12, 1968, in California, United States. Tony is also an Entrepreneur who owns a skateboard company called Birdhouse. He is regarded as one of the most influential skateboarders of all time. He has a net worth of $140 million.