How much does money cost to become a MotoGP carrier? 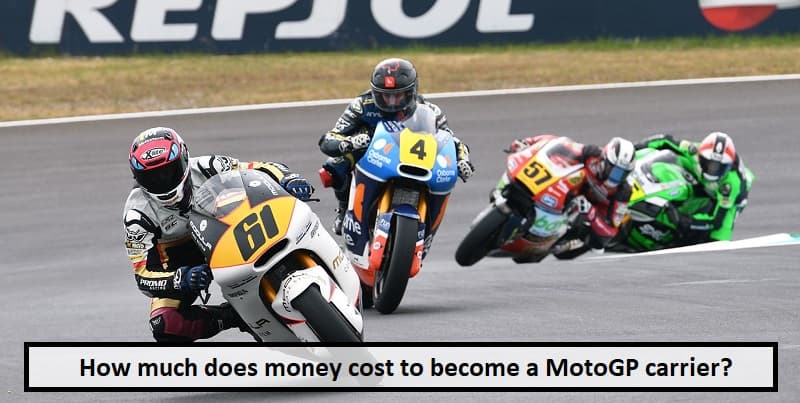 Grand Prix commonly known as MotoGP is a motorcycle-racing event. It is a premier class bike contest that is taking place on road circuits. The event is sanctioned by the Fédération Internationale de Motocyclisme. It is very classy to look at the motorcycle racing events as it has been a hit since the 20th century. The first annual competition was held in the year 1949.

Motogp is the oldest sporting event that is established in the World Championship. The foundation of the Fédération Internationale de Motocyclisme is the worldwide organization that governs the functioning of motorcycle sport since 1949. They provide an opportunity to plan the rules and regulations of the entire event for the World Championship. So let’s take a look at the details of the game, and how much does it cost to become a MotoGP carrier.

How much does it cost to become a motorgp carrier?

Like every event be it related to entertainment or sports, it requires expenses. To conduct such a huge event on a larger scale is not a cakewalk. It is known that to run a team for MotoGP, costs a minimum of €10million to run. With some additions and subtractions which include the costs of race-winning riders and bikes around 15 million euros.

It is understood that the cost of an older bike is around €4m, which includes only a competitive factory package. Meanwhile, the range has a different costing which stretches from around €250,000 to €1.5million. Adding another two or three million euros to any team’s budget. Despite running bikes, one thing that all the managers we spoke to are in agreement about is their position in the championship.

What is the criteria of MotorGP, track, equipments?

The track of the MotoGP event is made on a smooth pavement that will provide the riders an even road so that they can ride fast without losing control. While conducting the event the safety of the riders is of primary concern. So to ensure safety, the riders wear many protective headgears.

There are 9 primary pieces of equipment that are needed on the day of the event. They are Helmet, Airbag, Body Armour, Knee pads and elbow pads, race suit, boots, and gloves. The entire gameplay of Motorgp is about 45 minutes minimum. The distance which is traveled between 100-13 Kilometers. The first rule to the MotoGP is that the vehicle has to be of 1000cc prototypes. Along with it the there is a restriction, in the quantity of the fuel that is 22 liters.