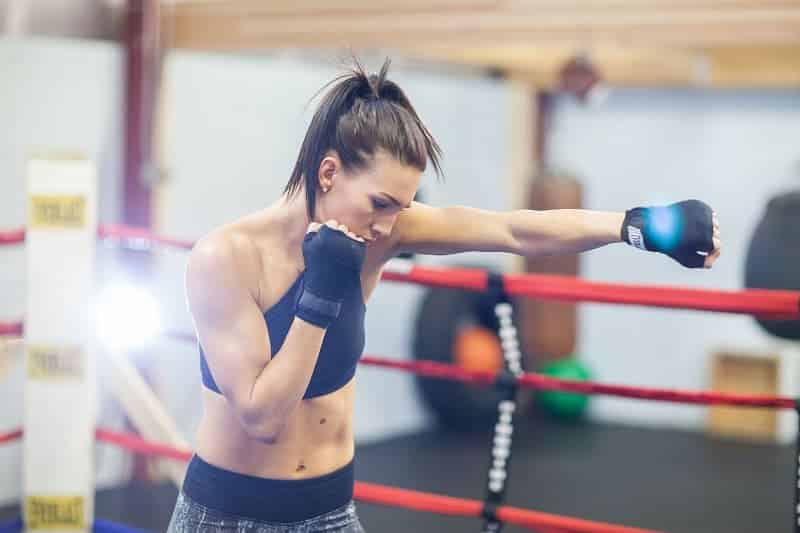 Professional Boxing matches refer to a combat-oriented fight between two individuals who fight in a closed ring, the match will end if either of the participants gets knocked out or if a is a limited round match when all the round ends. For Fitness there are different weight classes and all matches will have a referee to point out foul-play if any. The winner is either decided by the decision by judged points or if the individual knocks out the opponent.

Boxing is one of the most thrilling sports a person can watch. The matches are divided into many weight classes as per the fighter’s weight so it is very difficult to determine who is the best. But here are the top 10 best female boxers in the world as of right now

She fought in multiple weight classes which are Light Middle Weight, Middle Weight, Super Middle Weight, and Light Weight category, and won the World Championship title in all categories except in the middleweight. She was also was recognized as the world’s best light middleweight fighter in November 2020. She is also has a record for holding the title of world champion in Pless amount of matches.

She has a total history of 11 matches in her professional boxing career as of now which she never lost a single one of them. The upcoming match will mark the 12 matches of her boxing career in which she will be defending all of her previously earned titles.

Full mane Katie Tylor is a professional boxed based in Ireland. She was born on 2nd July 1986 in Bray, County, Ireland. She started her career in the Boxing Association that is fought her first boxing match in 2016.

She participate in Lightweight and Light-welterweight category boxing, She won the WBA lightweight champion in 2017, she also IBF champion title in 2018, she also won the title for WBC, WBO, and WBO jr. welterweight in 2019. She has been the undisputed champion of the titles ever since she won them.

She played a total of 20 matches and never lost any of them within which 6 were won by Knock-out and the remaining by decision. She also holds 18 golds and 1 bronze under Women’s Amateur Boxing from 2006 to 2013.

Full Name Maria Anastasia Trejo is a professional boxer Based in Mexico. She was born on 29 January 1980 in Mexico. Her career in boxed started in 1998 in Mexico City, Mexico.

She use to hold the title of WBC female flyweight champion in the year 2011 and 2012 but lost her title of champion to Ava Knight in Oct 2012 in the defending title match. She also held the title of WBC female bantamweight category champion from the year 2017 to 2020 until she was defeated by Yulihan Luna in Oct 2020. She also holds the record of the world’s second-most active female bantamweight boxer.

Till 2021 she fought and participate in 68 matches in her career, she won 54 times- 18 by knock-out and 36 by decision and lost only 10 times- knocked 3 times and by decision 7 times. No upcoming match has been reported.

Full name Cecilia Carmen Linda Braekhus is a Norwegian-based former professional Kick-boxer and currently one of the best professional boxers. She was born on 28 September 1981 in Cartagena, Colombo. Her boxing career started in 2007 against Ksenija Koprek in Switzerland.

Since the start of her pro boxing career, she has never lost a match except for the last two matches she played against Jessica McCaskill, she fought a total of 38 played and won 36 of them.

Full name Jessica Macaskill is an American-based professional boxer, she was born on September 8 1984 in St. Louis, Missouri, United States. She started her career in August 2015.

She fights in multiple class category which include Lightweight, Light Welterweight, and Welterweight. She holds the title of World Boxing Council female super lightweight champion in 2018-2020, The International Boxing Federation champion since 2020, and became the undisputed champion in both leagues. she was also regarded as the world’s best active female welterweight.

In her professional boxing career, she has only fought a total of 13 matches and won 11 of them, 4 by knockouts and 7 by decision, and lost two by decision.

She was born on 9th October 1988 in Carolina, Puerto Rico. She debuted in professional boxing in March 2009 against Jackie Trivillino. she is the only female to hold championship titles in more than four weight classes which were also recorded in the Guinness World Record.

In her professional boxing career, she fought a total of 44 matches in much different weight classes in which she has only lost once against Frida Wallberg in 2012 and had a draw once in her early career in 2009 against Ela Nunez.

She was born on 14th January 1985 in Gits, West Flander, Belgium. Her career as a pro boxer started in May 2008 against Jana Latova by winning the match.

She has fought a total of 48 matches in her entire career as of right now in Dec 2021 and only lost 3 matches out of them.

Born on 16 August 1990 in Nowodolinka, Kazakh SSR, Soviet Union. She is a German-based professional boxer her career debut on September 2009 against Melisa Koktar.

In her whole pro boxing career sh had fought 28 matches and only lost once against Claressa Shields in 2019 and drawn once against Anne Sophie Mathis in 2014.

In her career of 39 matches, she won 37 of them and 2 losses first in 2013 against Jessica Chavez and nest in 2021 against Juliana Vanesa Basualdo.